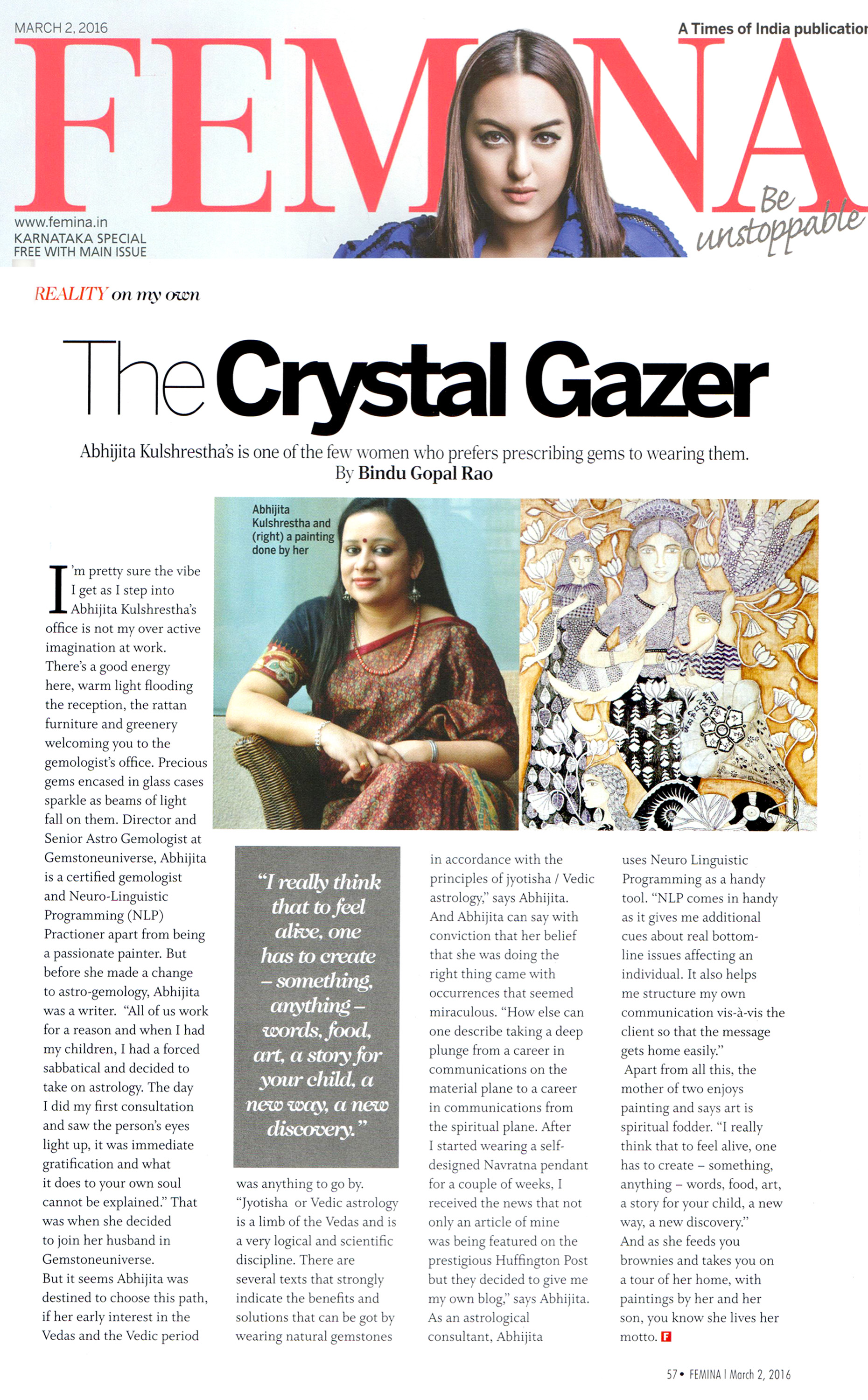 Abhijita Kulshrestha's is of the few women who prefers prescribing gems to wearing them.

I'm pretty sure the vibe I get as I step into Abhijita Kulshrestha's office is not my over active imagination at work. There's a good energy here, warm light flooding the reception, the rattan furniture and greenery welcoming you to the gemologist's office. Precious gems encased in glass cases sparkle as beams of light fall on them. Director and Senior Astro Gemologist at Gemstoneuniverse, Abhijita is a certified gemologist and Neuro-Linguistic Programming (NLP) Practioner apart from being a passionate painter. But before she made a change to astro-gemology, Abhijita was a writer. "All of us work for a reason and when I had my children, I had a forced sabbatical and decided to take on astrology. The day I did my first consultation and saw the person's eyes light up, it was immedidate gratification and what it does to your own soul cannot be explained." That was when she decided to join her husband in Gemstoneuniverse. But it seems Abhijita was destined to choose this path, if her early interest in the Vedas and the Vedic period was anything to go by.

"Jyotisha or Vedic astrology is a limb of the Vedas and is very logical and scientific discipline. There are several texts that strongly indicate the benefits and solution that can be got by wearing natural gemstones in accordance with the principles of jyotisha / Vedic astrology," says Abhijita. And Abhijita can say with convication that her belief that she was doing the right thing came with occurrences that seemed miraculous. "How else can one describe taking a deep plunge from a career in communications on the material plane to a career in communications from the spiritual plane. After I started wearing a self-designed Navratna pendant for a couple of weeks, I received the news that not only an article of mine was being featured on the prestigious Huffington Post but they decided to give my own blog," says Abhijita. As an astrological consultant, Abhijita uses Neuro Linguistic Programming as a handy tool. "NLP comes in handy as it gives me additional cue about real bottom-line issues affecting an individual. It also helps me structure my own communication vis-a-vis the client so that the message gets home easily."

Apart from all this, the mother of two enjoys painting and says art is spiritual fodder. "I really think that to feel alive, one has to create - something, anything - words, food, art, a story for your child, a new way, a new discovery." And as she feeds you brownies and takes you on a tour of her home, with paintings of her and her son, you know she lives her motto.